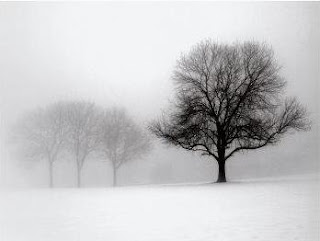 The old Ohio farm and surrounding areas were covered with old apple trees. Local legend implied they had been planted by John Chapman a.k.a. Johnny Appleseed. I cannot verify this as truth although Johnny Appleseed's travels did take him through the state. We had a lovely old apple tree on the edge of our property. I would watch this tree from the kitchen window while having a cuppa coffee and daily bread (morning devotions).

One autumn morning as the sunrise began to dispel the fog a doe and her twin fawns were eating apples from that tree. How good is the Lord to allow us a glimpse of His creation and provision? Moments such as that often serve as “eye spy” blessings in my daily life. Events such as this have become my little blessings of serendipitous opportunity.

Watching that tree through the seasons was also a reminder that life changes and yet continues on even through the harshness of the seasons. Seasons of drought, searing heat, the time of flood, the lightening strikes and the ice storms that often seek to annihilate and sometimes do destroy.

I love trees that produce fruits, flowers, colorful leaves, and wonderful scents. I miss trees that lose their multihued leaves in the autumn. I find it irresistible to view the bare branched trees during the winter months. Trees that have a dusting of snow that contrasts so wonderfully against their desolate unprotected bark.

When the winter doldrums hit – those days of grey skies and indescribable grey moods, I would look to those naked trees with their upturned branches. It often appeared that the branches were raised in symbolic praise and prayer. Almost as if they were beckoning to God to be touched with life once again. Eventually they would be. The snow would melt, the scent of newness (spring) would be in the air and seemingly overnight buds would appear. It was always so miraculous and yet so anticipated.

Weeping willows trees are a favorite. They are almost poetic when brushed by the wind. It is as if they are brooms that gently sweep the earth, cleansing the area in which they inhabit. Their flowing branches move in the form of a graceful ballet; bending, bending, ever bending and extending their branches to the birds of the air. Lord, do I help to cleanse the area I inhabit rather than pollute it or contaminate those with whom I come into contact with?

When we moved into our home in Arizona, there was a huge Mulberry tree growing from the side of the canal behind our house. It was well over 100 years old and displayed the scars of lightening strikes. Because it is the southwest and rampant with not too long ago history, I called it the ‘hanging tree.’ (It probably wasn't, I just called it that…) It housed a family of owls. I found it comforting when I heard them calling out in the evening. Sometimes in the morning I would find remnants of small animals they had caught and were taking back to the nest, only to drop them in the yard. As disgusting as those finds were, I hoped the baby owls didn't have to go without food during the night.

That century old tree was strongly rooted next to that canal. That’s how I want to be – strongly rooted in my faith – like a tree firmly planted by streams of water. And just like the ‘hanging tree,’ that takes time and seasons and even the storms of life as evidenced through the scars of life. Growth often seems slow but it is happening as long as we pursue it. We must faithfully pursue the Lord, study His Word, and fellowship with like minded believers. We must also talk to Him and allow Him time to speak to us.

…and so I pray

Abba, Father - thank You for trees and nature that speak to my heart! Help me to slow down and admire Your creation. Through Your grace, may I grow into an oak of righteousness. May I not become so rigid that I break, but retain qualities of the willow, that of being pliable and malleable. May I have the joy of watching my loved ones and my community benefit in the shadow of my shade due only to Your goodness. In Jesus’ name ~Amen!


In what events do you “spy” God in your life?

Have the harsh seasons of life drawn you to God? Or have they served to turn you away?

When, my friends, do you feel the closest to God? When do you feel Him tugging at your heart?

P.S.  He will be like a tree firmly planted by streams of water, which yields its fruit in its season and its leaf does not wither; and in whatever he does, he prospers. ~Psalm 1:3

Posted by Tamara at 5:53 AM
Email ThisBlogThis!Share to TwitterShare to FacebookShare to Pinterest
Labels: A Place of Quiet Peace, In the Scope of Eternity, Ordinary Days

Thank you for stopping in. Your comments are a source of encouragement.